This weeks article takes an example from nature as a way of gaining insight on how to deal with the disturbances in our mind that we might normally try and run away from. Sometimes an image really does speak a thousand words, and I find this particular image very helpful in both dealing with my own issues and also trying to communicate to others how to work with inner challenges in a more meditative and watchful manner.

Yours in the spirit of staying on the tail of the shark,
Toby The Inner Sharks of the Mind

There is quite a famous nature documentary sequence where a seal is being attacked by a white shark. Having escaped from the shark’s jaws one time, rather than making a run (or swim) for it, the seal instead stays behind the sharks tail, following it very closely, until it gets close enough to the land to quickly leap on shore. Rather than running away or confronting the shark the seal dealt with the threat by staying close to the shark, watching and following it very closely.
I find this image an extremely useful one when thinking about how to deal with imbalances, fears, attachments and other negative or volatile forces in our mind. The temptation can be when we sense a threat to our inner well being is either to run away from it (or go into denial), or to get into a confrontation or battle with it. Both of these techniques take a lot of energy and sometimes the act of confronting or running actually creates even more damage.
A more meditative and energy effective method is to act like the seal. When we sense the imbalance or negativity, try to get as close as you can to the experience. Rather than pushing it away, observe its movements closely with as little judgment as you can. Follow the negative emotion, energy or feeling like the seal staying on the tail of the shark; don’t confront or run away from it, just be behind it and watch its movements very closely.
The interesting thing about this technique of watching and following is that quite often the act of watching and following the disturbance will actually act to dissolve away the tension that has been created. By following the thoughts and fears that you are afraid of they actually seem to dissolve away.

Step 1: Pick a difficult mind that you regularly run away from or get inwardly “beaten up” in a confrontation with. Name it and decide that you are going to try this new technique on it. For example you might think “I am now going to follow the shark of my insecurity, staying on its tail”.

Step 2: Watch your (continuing the example) insecurity, don’t run away from it or confront it, just be with it, relaxing and going with its movements.

Step 3: After a while you may notice that the power of the hold that your insecurity has over you has decreased. When you are ready, simply let go of the insecure mind and let it dissolve away. Then spend a short while resting in a state of non-conceptual awareness and enjoy the feeling of relaxation that arises from temporarily having liberated yourself from one of your persistent fears.

© Toby Ouvry 2013, you are welcome to use or share this article, but please cite Toby as the source and include reference to his website www.tobyouvry.com

Meditation Technology to Support Your Practice 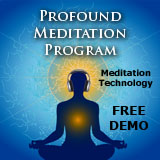